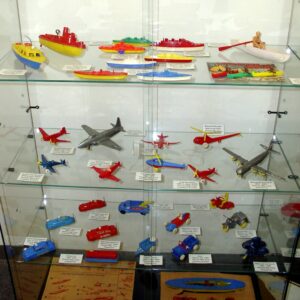 “Plastic Toys” by misterbisson is licensed under CC BY-SA 2.0

Toys are typically one of the more toxin-free substances your family comes into contact with on a day-to-day basis, thanks largely to parent oriented consumer groups pushing to get known toxins removed from children’s products. Yet everything we produce in modern society contains one chemical or another, and toys are no exception.

Sometimes problems emerge because of low-quality production control or because supply companies use toxic materials without a company knowing. For example, in 2007 Spin Master recalled 4.2 million sets of Aqua Dots beads after it was revealed they were coated with a chemical that essentially turned into a version of the date-rape drug once ingested. (Time, 8-17-2015, p. 11) And most people probably remember the scare over toxic toys from China. Because companies typically base their manufacturing overseas and may use dozens of suppliers for the materials that go into their product, it’s possible for toxins to slip through because a company somewhere along the chain uses a toxic substance to save money or because it’s easier.

Even under normal circumstances, however, the material that goes into toys can pose concerns. A recent report by healthystuff.org, produced by the Michigan-based Ecology Center, found high cadmium levels in 48% of the toys tested, and 78% were made with PVC, or polyvinyl chloride, which is often contaminated with lead. (Szabo, 12-6-2010) And of course, most toys are made out of plastic, almost all of which contains some sort of endocrine disruptor or estrogen-mimicking chemical.

That said, the toys your kids play with are typically the least of your concerns, and pale in comparison to the toxic exposures that will occur elsewhere. Concerned parents can take the following precautions: