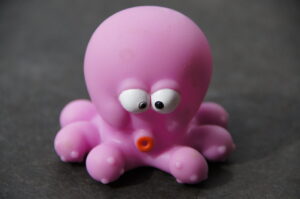 A plastic toy “quitsch” by teicepix is licensed under CC BY-SA 2.0

One of the most consistent sources of chemical exposure – a source that most of us don’t think twice about – is plastic. Plastics basically ARE chemicals, consisting of petroleum (oil) mixed with a variety of other substances that will either color them or shape the way a plastic behaves. This is why we have plastics that bend, others that are firm, some that are shatter-resistant, and so on.

The problem is that most of these ingredients are fairly toxic – not exactly the type of stuff you’d want to put in your body. Mike Usey, CEO of PlastiPure, says he doesn’t really consider any plastic safe. “Some are just safer,” he says. Michael Green, executive director of the Center for Environmental Health, says that “We’re doing an unplanned, intentional science experiment on ourselves. Unplanned because we didn’t agree to have plastics tested on us, and intentional because we say it’s fine to use.” (Toland, 2014)

There are several common plastics chemicals that are known to be harmful to human health, many of which we’ll discuss separately in upcoming sections. Here are some of the more common ones:

The problem with plastics

The unavoidable problem with plastics is that they are all made of some concoction of chemicals, and many of these substances can be toxic. A number of them share a similar molecular structure and interact with the body in similar ways. Chemicals such as BPA and phthalates get the most press. But it’s quite clear that many of the chemicals contained in plastic could have adverse effects on human health.

For example, BPA’s twin, bisphenol AF (BPAF), may be even more potent than BPA when it comes to altering the effects of human hormones such as estrogen. It has fluorine in place of six hydrogen atoms, but both chemicals act on estrogen receptors. BPAF is so potent that many scientists refer to it as BPA on steroids. It, too, is a common ingredient in many plastics, including electronic devices and optical fibers.

Most of BPA’s estrogen-mimicking effect comes from activating human estrogen-related receptor gamma, or ERR-gamma. BPAF seems to mostly ignore ERR-gamma but has a strong affinity for the estrogen receptors alpha and beta. BPAF elicited no activity from ER-beta, but did block the body’s own estrogen from accessing the receptor and conducting normal cellular operations. (Raloff, 6-5-2010) Two different (but similar) chemicals, two different ways in which they affect the body, yet a very similar outcome (estrogen disruption) when it comes to human health.

The same pattern holds true for other chemicals. Dibutyltin (DBT) is a chemical still widely used in PVC plastics, yet has been shown to disrupt hormones and immune cells even at nano doses. (Gumy et al., 2008) DBT’s cousin tributyltin (TBT) is also a bad actor. Even small amounts of exposure to such chemicals could be significant, especially for babies, since their young livers aren’t mature enough to detoxify it yet.

Are some plastics safer than others?

Examples like these beg the question: Are any plastics truly safe? Thus far the answer to this question is “to be determined.” For the perfect illustration of this, we can look to none other than the concern over BPA and the push to eradicate it. Numerous products from baby bottles to food containers now tout themselves as “BPA-free.” Yet a UCLA study released in early 2016 found that bisphenol s (BPS), the supposedly safe chemical that manufacturers have turned to as a replacement for BPA, may cause reproductive problems and cancer at rates higher than those associated with BPA.

Nor can you always trust what’s on the label. In one of the largest and most comprehensive tests of plastic products to date, the company CertiChem analyzed 455 products and found that nearly all the items leached estrogen-mimicking chemicals, including those marketed as BPA free. (Toland, 2014) Another analysis by the Milwaukee Journal Sentinel in 2008 tested ten items labeled as “microwave safe” and found that all released toxic amounts of BPA when heated. So it’s not always as simple as switching products to protect your family.

Plastics are here to stay, and we’re not about to rid our environment of them anytime soon. Nor would we even want to. Plastic is probably the most useful substance ever created by humans. Every day plastic helps to save lives and protect us from things like serious cuts and foodborne illness, not to mention the convenience offered by plastic.

This doesn’t mean you need to resign yourself to chemical poisoning. Studies have found there are ways to greatly reduce your family’s exposure to the harmful chemicals in plastics, which we explain in detail later on in our e-book.