Lead is still permitted in U.S. toys as an additive to plastics, where it is not accessible. The current lead standard limits lead in toys to 100 parts per million or less. However, lead is also sometimes found in imported toys, especially cheap ones from China. While lead paint and other lead products are not supposed to be used in materials sent to the U.S., it’s not as if customs is swabbing the trinkets that come into this country. If a company decides to skirt the rules and use lead in their products, it’s typically only discovered long after the fact. 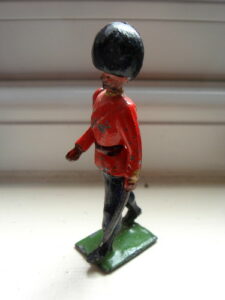 “guard” by Kollage Kid is licensed under CC BY-NC-SA 2.0

Older toys are more likely to contain lead. Old toy soldiers, for example, contained enough lead within a single toy to render several million toys unfit for sale at today’s standard. This is because ‘tin’ soldiers were made not primarily of tin but a lead-tin alloy containing 60% to 75% lead. (Gray, 2012)

Even toys made just a few decades ago can be toxic. For example, some diecast kits came with lead casts for children to cast in their own kitchen and then file smooth, which spread lead dust all around.