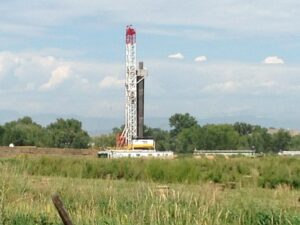 “Hydraulic Fracking” by phxlaw1 is licensed under CC BY-NC-SA 2.0

Fracking has taken the world by storm in recent years, leading to an unprecedented energy boom in the U.S. and elsewhere. It also happens to be one of the most toxic industries in the modern world and can pose a significant threat to your family’s health. Yet most of the public has no idea what fracking is or why it can be so hazardous.

Fracking is a drilling technique that involves drilling a well down to shell rock, then pumping a toxic sludge deep underground at very high pressures. This high pressure fluid breaks up the rock plates below and allows oil and gas that had previously been trapped inside fissures to seep out. This allows companies to collect much more oil than they ever could with traditional drilling.

Why is fracking so controversial?

Fracking is controversial for many reasons that will become clear as you delve into this material. But the main thing is that fracking relies on some very nasty chemicals. These chemicals are mixed with sand and water to make a slippery sludge that’s more effective at breaking up the rock. Some of this chemical sludge is left underground, but up to 40% of it comes back up to pollute the land, air, and water supply. Fracking can also contaminate people’s groundwater if done improperly, as you might have seen evidenced by Internet videos of people lighting their tap water on fire.

It’s also controversial simply because of the mess it makes. You have lots of heavy trucks traveling along local roads. Drillers come into town digging wells across the street from schools and child care centers. They weave and snake their pipes around people’s homes. In most instances, neighbors of whomever signed the lease are powerless to do anything about it, even though they are deeply impacted by the drilling.

Everyone likes cheap oil and gas, but nobody likes the toxic pollution that comes with it. This hypocritical double standard is on full display in the state of New York, which is perfectly happy to consume gas drilled around Pittsburgh but yet has taken steps to ban fracking in their own state. (Fischetti, 2010) Fracking is fine…so long as it occurs in someone else’s backyard!

The history of fracking

To better understand the fracking issue, you need to first understand a little bit of history about how fracking came about. The concept of fracking actually dates back to the civil war period, when miners used nitroglycerin to blow holes in oil-soaked caves. A different version in the 1960s used subterranean nuclear explosions to fracture rock deep underground. But it’s only recently that fracking has been commercialized for gas and oil extraction purposes.

The fracking industry of today owes much of its existence to what is commonly known as the Halliburton loophole – a controversial section within a spending bill that was essentially crammed through legislature by then President George H.W. Bush and Vice-president Dick Cheney. The loophole gives fracking companies an exemption to the Clean Water Act & Energy Policy Act of 2005, essentially letting them pollute the environment with impunity. Imagine I was a hitman for hire who somehow became vice president, and I decided I wanted my former company of hitmen to make more money off their craft. So even though murder is illegal, I pass a law that says me and my company are exempt from homicide laws, and can therefore murder whomever we please with complete immunity. This is essentially what Dick Cheney and his henchman did. Oil companies could now pollute the environment without regard for environmental regulations, so long as it was profitable for them to do so. And pollute they did.

The fact that such an exemption was necessary in the first place says an awful lot about the nature of this business. Companies know that fracking is too dirty to comply with environmental regulations. But with this free pass to pollute signed into law, the industry took off and it hasn’t looked back.