“Truly clean air has become a rarity as the twentieth century ends. Even in the Arctic, haze from industrial pollution now darkens the atmosphere, and many of us have had the experience of watching air quality deteriorate in places we have lived over time.”
– Dr. Andrew Weil, M.D. (1995, p. 157) 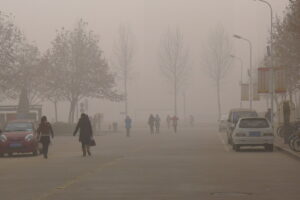 Air pollution is one of the most visible consequences of our industrialized world, and one of the most routine ways in which children are being poisoned. Approximately half of all Americans live in areas where the pollution is bad enough that it’s often difficult to breathe; areas with unhealthy levels of either ozone or particulate matter. (Koch, 4-27-2011) Around the globe the situation is even worse: A recent report by the World Health Organization estimated that roughly 9 out of every 10 people live in areas with excessive air pollution. (Worland, 2016)

While clean air legislation has improved air quality in the U.S. over the last several decades, your family is still at risk. “The nature of air pollution has changed,” says Philip J. Landigran, M.D., director of the Children’s Environmental Health Center at Mount Sinai School of Medicine in New York. “The truly gross pollution has gotten much better. But today we have a lot of fine-particle pollution, which is invisible but toxic to the lungs. So even though we’ve made progress, air pollution continues to be a threat to children’s health.” (Denworth, 2013)

As Justin Worland notes, “it’s not just cities in the developing world, like Beijing, that face dirty air – Western metropolises like New York City and London are on the list (of cities with unsafe air) as well.” (Worland, 2016) Air pollution remains one of the most serious environmental threats facing urban populations. (Cohen et al., 2005)

The danger of air pollution

Because inhaled toxins pass directly into the lungs, which then send them undiluted into the bloodstream, airborne contaminates tend to be more dangerous than other exposures. This fact means inhaled toxins can lead to a variety of health problems; not just lung problems but DNA damage, neurological impairments, and cardiovascular problems. Infants and children, the elderly, and those with lung or heart disease are most at risk from exposure to air pollutants.

What about the clean air act? Doesn’t it protect us?
Laws encouraging clean air certainly help, but fall well short of keeping the public safe. Decades of scientific research has made it clear that serious illness and death occur from common air pollutants at levels well below the thresholds set by regulatory standards. Furthermore, these regulations are constantly being undermined by industry interests. Case in point: President Trump has installed industry insiders into key government positions at the EPA and other cabinet posts. These people – among them oil execs and industry lobbyists – have vowed to roll back decades of progress in cleaning up our air, and will instead implement policies that poison your family so that their companies can make a few million more in profits.

Why air pollution is everybody’s problem

Air pollution is not just a big city concern. While those in urban centers bear the brunt of it, this problem affects us all. Snow in Antarctica is stained gray with the soot and particulate matter of pollutants created thousands of miles away, and people in the U.S. breathe in some of China’s dirty air on a regular basis. As Daniel Stone writes, “Pollution always starts locally, but it quickly becomes everybody’s problem, irrespective of treaties, national borders, or oceans.” Prevailing winds blow Asia’s polluted air over to North America, and it’s estimated that emissions from China offset reductions in America’s pollution by 43%. (Stone, 2016)

Fracking and oil rig operations are poisoning the air of our countryside, and some rural areas where fracking is occurring have air that is just as bad as that in Mexico City. Even in seemingly pristine Alaska, physicians are advising people to wear respiratory protection to avoid heart and lung damage on days when the air is bad. (USA Today, 10-3-2016, p. 4A) Between the smog over cities and people needing respiratory masks to go outside in Alaska, it’s safe to say we have a serious problem on our hands.

As Dr. Weil remarks, “In the most polluted cities of the world – Mexico City being the worst example – it is not uncommon for people to experience chest pain and breathing difficulty on bad days and for city governments to cancel school and issue warnings to keep very young and very old people indoors. If this is a preview of the future of our own cities, it is a most unsettling one.” (Weil, 1995, p. 158)

Additional information contained in our e-Book:

Get our complete eBook, Toxic Childhood, for just $7.99. All proceeds from your purchase will go to help kids in need.