“My baby girl had no idea. I know for a fact she hadn’t been told how dangerous they are.  And I am just as much to blame for that. I never saw those tracks as a threat.”

-Tara Stickel, mother of girl who was struck and killed by a train.

Child safety around trains and train tracks doesn’t command the same attention that cars or bicycles do, yet trains remain a steadily consistent killer. Each year there are around 400-500 pedestrian train deaths. Many of these involve children and teens. The proliferation of high-speed railroad tracks has been making matters even more dangerous. Not only are the trains traveling much faster, but they are designed to reduce friction against the tracks, which also makes them much more silent. Fourteen-year-old Marie Strickel, daughter of the mother quoted above, was walking along the train tracks after missing her school bus that morning. She was listening to her iPod and walking with a friend, who was not listening to music. Her friend heard the train just in time to jump to safety. Anna Marie stood no chance – she was struck and killed by the high-speed Amtrak train.

The danger posed by trains

Unlike cars, we know precisely where a train will be headed next, so it’s easy to overlook the risk they pose. But trains have some other disadvantages that make them dangerous. For one, there is nowhere to steer a train. So this takes one potential stop-gap out of the loop. A conductor who notices a distracted child cannot take steps to avoid them. Trains are notoriously hard to stop – a freight train traveling at 60 M.P.H. needs about a mile to stop after applying the emergency brake. And they’re getting faster, with some routes in the U.S. breaking speeds of 100 M.P.H., and those in Europe regularly traveling at around 200 M.P.H. So when a dangerous situation arises, as Federal Railroad Association spokesman Rob Kulat observes, “You can’t stop. You can’t turn, obviously. You just have to watch it happen.”

Teens are especially likely to be struck by trains, for a couple of reasons: 1) They are more likely to be out and about on their own, and 2) They frequently listen to loud music with headphones, and thus may not hear a train if walking along the track. Train tracks that run alongside middle schools or high schools are especially dangerous, since kids use them both as shortcuts and as hangout spots. At first glance having a hangout spot near railroad tracks may not seem all that dangerous, but when you consider that teens hanging out together often have music blaring and may be drinking, you can see why it would be.

If you have an adolescent you should take the time to talk with them about these dangers, possibly reciting the story earlier. In addition, talk with your kids about the following train safety rules: 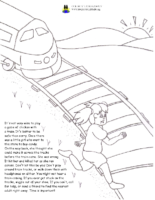 Print a train safety coloring sheet for your child