Each year, more than 10,000 children are rushed to the emergency room because they are choking on a piece of food. While the act of eating inherently comes with risks, certain foods are far more problematic than others, and the vast majority of child choking incidents can be attributed to a select few types of foods. The good news is that there are simple fixes that can virtually eliminate the hazard from these foods, thus diminishing food choking risks substantially. All parents need to know what these problem foods are and take appropriate steps to diminish the risk: 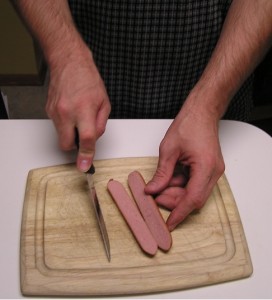 Hot dogs are single-handedly responsible for 17% of all child deaths from choking (or a total of about a dozen kids killed by hot dogs every year). They are so potentially hazardous that some pediatricians and E.R. doctors have nicknamed them things like “death on a bun” or “the tubular food of death.” This is because, as pediatric emergency doctor Gary Smith says, “If you were to take the best engineers in the world and try to design the perfect plug for a child’s airway, it would be a hot dog.” The American Academy of Pediatrics also labels hot dogs as a “high risk” food.

The good news is that there’s a simple fix that doesn’t involve taking away your child’s favorite food: All hot dogs need to be slit lengthwise before giving them to children. (See the picture on this page.) Also be cautious about sausages and corn dogs. While a corn dog is more difficult to slice this way, you should at least remind children to sit still and chew carefully when eating them. 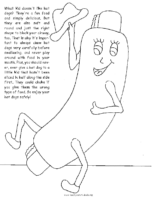 Whether it be pork loins or a steak, such unprocessed meats are often difficult for children to chew, which means kids sometimes try to swallow pieces before the job is done. This toughness also means that you often end up with a chunk of meat just pliable enough to lodge securely in a child’s airway, and tough enough that it isn’t going anywhere. To minimize risks, we recommend that parents slice up a child’s pieces into thinner strips that are less likely to block their airway, and which will also be easier to chew.

Of course, most parents know about the danger of lollipops and other hard candies, but many other candies can cause problems too. Jawbreakers are especially risky, since they are round and often large enough to block a child’s airway if swallowed. Their long-lasting nature also means kids are more likely to run around or play with them in their mouth. Even soft candies such as taffy, Skittles or Starbursts can be dangerous. Most parents wouldn’t think a Skittle is large enough to block a child’s airway, and they’d be right. The problem is that kids eat many at a time, and when chewed, just like if you were to take a whole bunch of playdough pieces and mold them into one bigger ball, soft candies such as Skittles or Starbursts can become clumped together like a taffy ball, forming an object that can block a child’s airway. This is the problem with all such soft candies from soft caramel to taffy. So keep certain candies away from toddlers (taffy, jawbreakers), and closely monitor older kids with both hard and soft candies, to ensure that they A) Chew thoroughly and only eat one piece (or a few skittles) at a time, B) Do not run around or play with candy in their mouth. 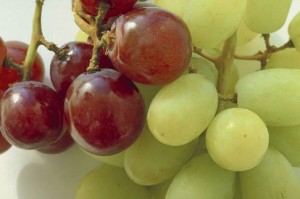 Grapes are a common choking hazard.

These are nature’s own naturally designed child airway plug. Round, just the right size, and nice and slippery, which makes them difficult to dislodge once stuck. Always slice grapes in half lengthwise before giving them to infants and toddlers, and supervise older children closely to make sure they chew. Also, do not let kids play games of throwing a grape into the air and catching it in their mouth, as it might hit the mark spot on and lodge in their esophagus.

Print a Grape Safety Coloring Sheet for your kids to teach them about choking prevention.

It’s not the cake that’s the problem. It’s that sometimes young children eat the cupcake liner along with it, which can be a nasty choking hazard. So remind children not to eat the liner, or simply remove it before giving them the cupcake.

Apples and other skinned fruit

It’s the skin on apples and other fruits which can pose a problem, and the tougher the skin, the more potentially hazardous it is. When a child has a piece of apple stuck in their throat, the skin can form an air-tight blockage. Yet this shouldn’t discourage parents from giving children fruit – they are more likely to be harmed by the effects of obesity and an unhealthy diet. Just remind older children to chew cautiously, and it’s best to remove the skin or slice fruit into thin slices when giving these foods to a toddler.

During a field trip to the zoo with my class of kids, we sat down at the park afterwards for a sack lunch. One boy had brought an apple, which he seemed to enjoy. In fact, after he was done demolishing it, we looked over to find him sucking on a tiny piece of stem. He had literally eaten the entire apple; top, bottom, core, seeds and all. That is why food with pits, such as pitted olives, plums, whole peaches, etc., can pose a choking hazard to children. They may try to eat the pits, just like that boy was determined to polish off every last trace of his apple.