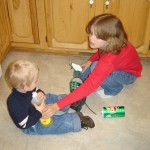 One downside of living in our technologically advanced society is that families routinely keep dozens of toxic and potentially deadly chemicals right under their own roof. Here are some of the most common sources of child poisoning, as well as some of the most overlooked poisons that you might not even be aware of.

Spray cleaners: Household cleaners or chemicals in spray bottles are particularly dangerous because of their allure to children. They are colorfully packaged, often sweetly scented, and come with handles that just beg to be squeezed. Having worked with children for many years, I can tell you there’s something about spray bottles that is akin to a large empty cardboard box: the child sees in it endless possibilities for play that adults would not imagine. Many a parent has turned a corner to find their toddler or preschooler sitting with mouth wide open, spraying the cleaner down their throat and ingesting it (or spraying it into a sibling’s mouth). One study by researchers at Nationwide Children’s Hospital found that spray bottles were implicated in 40% of all household cleaner poisonings involving children.

Rat poison: You’d think that with the word “poison” right in the name, parents would be more cautious in keeping it away from children. Sadly, this is not the case. The American Association of Poison Control Centers receives 12,000 to 15,000 reports each year involving children under the age of six being exposed to rat poisons. Garden variety rat poison pellets look a little too much like candy, granola, or cereal to a curious kid. Which is even more frightening when you consider that as little as 10 pellets of rat poison can kill a child, and that using rat poison as directed means leaving piles of it in little nooks and crannies around your house. For this reason, rat poisoning SHOULD NEVER be used in any home, yard, or structure where children congregate. Period. It is simply too dangerous. There are other ways to deal with pests – skip the poison.

Accelerates & flammable chemicals: As a general rule, if you can light it on fire, it is going to be quite toxic to kids. Whether it be gasoline or chemicals like torch fuel or WD-40, these accelerates can cause significant damage to a child’s esophagus, lungs, and digestive system. So even if a kid only takes a single gulp before realizing their mistake, it can still cause significant, sometimes life-altering damage.

Pesticides: Some of the nastiest chemicals known to man go into pesticides, so keep them away from children. Not only do they present a poisoning danger, but most are toxic even to the touch, and should never be handled by children or pregnant women.

Antifreeze: Not only is this a deadly poison, but what makes it more dangerous is that it even tastes good. The sweet taste may lure pets or small children.

Pool & hot tub chemicals: The chemicals used to treat water for pools and hot tubs are some of the most toxic chemicals you have around the house. Merely breathing in a strong dose of undiluted chlorine can kill a child or cause permanent lung damage. Treat these chemicals with extreme caution.

Fertilizer and lawn treatment chemicals: Much like pesticides, these can range from mildly toxic to potentially deadly. It’s especially important to watch younger kids to ensure they don’t pick up fertilizer pellets off the ground and eat them.

Toothpaste: It may seem counter-intuitive, but toothpaste is the poison you put in your mouth. Its active ingredient is sodium fluoride of some type. While healthy for teeth, this is actually a reasonably toxic poison if ingested, which is why they say you should teach preschoolers to spit and why the tube says you need to call poison control if a child swallows more than what is used for brushing. While the overall concentration of sodium fluoride is small, usually around 0.24%, it could pose a real problem if a child ingests a significant amount eating it directly from the tube, which has been known to happen.

Tobacco product: Certain tobacco products, such as Camel Orbs or other dissolving novelty products can be a danger. These tobacco lozenges look like Tic-Tacs and often taste like candy, and can poison little kids who may eat many at a time. The same goes for vaping fluid, which a child may drink. Chewing tobacco can also pose a problem if a child eats it. On a lesser note, although nicotine gum is unlikely to pose any serious safety risk, you probably don’t want your child getting a nicotine fix, and it can also make them sick, so keep it away from kids.

Alcohol: Most people don’t think of alcohol as a poison, but that’s precisely what it is, and it can be quite toxic to young children. Store alcohol in a safe place, and don’t leave glasses of alcohol lying around where children can reach them.

Hand sanitizer: Many hand sanitizers contain alcohol, and while they are unlikely to kill or seriously injure a child, there are reports of small children being found drunk after drinking them. Read our full length article about The Dangers of Hand Sanitizer.

Food extracts: Food extracts such as vanilla and almond are potential poisons to children in their undiluted form, so store them safely.

Mouthwash: Many brands of mouthwash’s contain a high enough concentration of alcohol to poison a child.