Suffocation deaths are most common among infants, who lack the muscle strength to pick their face up when it is wedged against a soft object. (Infant suffocation prevention is discussed in detail in our Baby Safety section.) For older kids, most asphyxiation deaths come from getting themselves trapped inside a container or other object, or from placing plastic bags or other dangerous items over their head.

Child Suffocation: How it Happens

When you look at something like a plastic bag, it hardly seems hazardous. In fact, it seems downright dumbfounding to suggest that a child – especially YOUR child – could manage to kill themselves with one. In discussions about child suffocation, people commonly ask: “Why wouldn’t kids just take the bag off their head?” To answer this question, parents need a greater appreciation of the nature of this risk that will help them better understand how children suffocate.

The answer is that child asphyxiation is a subtle process that tends to sneak up on kids. Once children have put themselves into a dangerous situation, each breath brings in a little less oxygen and a little more carbon dioxide, but it doesn’t happen all at once. It’s not as though a child is instantly gasping for breath. This oxygen deprivation can build to a critical point without the child’s awareness. Children suffocate because once they start to realize they need air, they may not have all that long before blacking out. If they lose consciousness before escaping, it’s all over. And hence, kids may die in certain situations not because they couldn’t get out, but because by the time they realized there might be a problem, they couldn’t get out in time.

Harmless as they may seem, the warnings about plastic bags have come about because it happens. Children who seem perfectly capable of escaping a plastic bag have still died with one over their head, sometimes because in play they did something stupid like taped or tied it on.

Kids have been known to climb into a garment bag and suffocate after sealing themselves inside.

These may seem like the perfect play space to a toddler or preschooler, and can hold the same allure as a large cardboard box. Making matters worse, they often have zippers that work only from the outside. Children may seal each other inside or a child may climb in and not find their way out in time.

This is especially dangerous if kids get a whole roll of it, and one kid decides how fun it would be to wrap up the other child (or themselves) like a mummy. 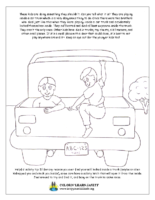 What parents can do to prevent suffocation