Some things that kids do may not even register to them as bullying, and spreading rumors about someone is one of those things. For ex-ample, girl A hears some unconfirmed gossip about girl B. Girl A, chomping at the bit with this juicy nugget of information, proceeds to tell everyone in her social circle about it. Girl A believes she’s doing nothing more than talking about the happenings in the world with friends. Of course, the juicy rumors she’s helping to spread have absolutely no truth to them. So girl B, from her perspective, only knows that girl A is going around spreading hurtful lies about her to the entire school. Girl B certainly believes she is being bullied. Girl A foolishly believes everything she hears, and from her opinion, is merely enlightening friends about a “fact” she heard through the grapevine.

The Nature of Gossip

The problem with gossip is that it tends to be a strategy employed by individuals used to further their own reputations and selfish interests at the expense of others. (McAndrew, 2008) And it’s almost never positive. As Frank McAndrew writes, “positive information about such people tends to be uninteresting to us. Finding out that someone already higher in status than ourselves has just acquired some-thing that puts that person even further ahead of us does not supply us with ammunition that we can use to gain ground on him.” (*ibid) Gossip tends to regress to more than just chat-ting about our lives. It’s a method of jockeying for social position at the expense of those we talk about; trying to elevate ourselves by tearing down the competition of our peers. In its barest form it’s a tool to destroy and diminish others. And in that aspect, gossip could definitely be considered a form of bullying, particularly when it takes on a relentless and ongoing nature, or when the rumors are invented by the bully. 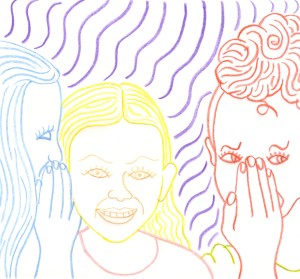 This idea that negative gossip is what garners our attention has been documented by researchers at Northeastern University. They showed volunteers an array of faces, some of which had been linked to negative gossip, such as “threw a chair at a classmate.” They then presented a series of faces to just one eye of each subject, while the other eye was shown an unrelated image. Since the brain can only handle one image at a time, this test can expose hidden biases. They found that when faces linked to ugly rumors appeared, the subjects’ gazes lingered longer on those than on ones they’d been led to believe were nice or neutral, uncovering our bias towards paying attention to negative gossip. (Week, 6-10-11).

Gossip and Rumors as a Form of Bullying

“One of my friends — well, she was my friend — started a rumor about me and this guy. She told everybody I had sex with him. And I didn’t. She’s telling everyone that In pregnant, because I’m fat and everything. But I’m not,”

Gossip can come in infinite varieties, and sometimes gets quite creative. Yet by far the most popular subject of rumors involves sexuality, sexual orientation, sexual exploits (or lack thereof), or any other topic that attacks a child’s sexual identity. Topics of gossip commonly include things like who has the smallest penis, who is the sluttiest girl in the school, or who has STD’s. (ABC, 5-16-2008, 20/20) Girls may be bullied through gossip that they “sleep around” or prostitute themselves on Craigslist, while boys may have rumors spread that they are gay or still a virgin. Another common form of sexual gossiping is to spread rumors that somebody slept with someone who other teens generally consider repulsive or a social pariah, or that someone is pregnant or had an abortion (frequently the latter rumor following the first). Sexual gossip may be started by a former boyfriend or girlfriend who, bitter about the break-up, decides to start telling others about every embarrassing tidbit (real or made up) involving their sexual life (again, real or made up).

Rumors can also involve any other negative attribute a bully dreams up, but since we in the Western world tend to raise our kids in a sexually abusive manner that leaves them profoundly ashamed and deeply insecure about sexuality, most rumors tend to go straight for the topic that every child is most vulnerable about. As Garbarino & deLara (2002, p. 99) write, “For teenagers, the most troubling form of sexual harassment is when someone spreads sexual rumors about them – anything from saying they are gay or lesbian to spreading false information about being sexually active or pregnant,”

In addition to gossiping amongst peers, rumors can take the form of anonymous messages: writing that is scribbled on the bathroom walls, for example, or an anonymous note passed around to all the students or hung on a poster in the hallways. Gossip has also found a new venue by way of the Internet, giving those who spread rumors a wider-ranging reach. “In the past, what took the sting out of gossip was that it was impermanent, localized and would disappear with fading memories,” says Daniel Solove, a professor at George Washington University Law School. “Now gossip is everywhere and permanent because the Internet doesn’t forget.” (Zaslow, 2010) This sentiment is echoed by Sam Chapman, CEO of Empower, a public relations agency that fights gossiping: “Gossip is high stakes in the Internet age. It’s emotionally lethal. It’s leading to suicides.” (*Ibid)

Using rumors and gossip to bully someone is perhaps the most insidious type of bullying there is, because it unwittingly recruits kids who aren’t involved in the dispute to nonetheless contribute to the victim’s torment. As one psychology journalist writes, “Rumors have a way of slipping under our mental defenses before we think to question them. …Most of us don’t like to think of ourselves as gullible. But we’re especially likely to accept as true – and do our best to spread – tales that have several specific characteristics that take aim at our best defenses.” (Clark, 2008, p. 82) So once a rumor is started it can take on a life of its own. Without a shred of evidence people accept it as true and spread it like a virus to others. Worst of all, even when presented with clear evidence that a rumor is false, people often stick with it, choosing to believe the fiction over fact. False beliefs are hard to kill once they get started.

Gossip is hurtful because it hijacks a child’s very identity, replacing actual fact with the bully’s fiction. A child no longer controls his or her social reality. A teen that holds honesty in high regard can suddenly find themselves living with an identity as a dishonest backstabber, all through no action or fault of their own. A heterosexual child who has others spread rumors that he is gay can find himself struggling to overcome a label that alters his core identity as a person, and there is often nothing that can be done about it.

Though we like to pretend that in America we are fair and forgiving and non-judgmental, this is a happy little delusion we tell ourselves to feel good. In reality, we are a people that eat up more tabloid gossip while judging others more quickly and harshly than any other nation on earth. There are numerous examples of people who have been cleared of crimes with irrefutable proof of their innocence, who nonetheless have to deal with large swaths of the population who refuse to give up their original judgment of guilt. A bullied child who is bullied through rumors and gossip often finds themselves facing similar challenges. Their bully is writing the narrative of their life, and no matter what they do, a large percentage of their peers – perhaps even a strong majority – will uncritically adopt these negative judgments as fact, which in turn alters the way they perceive and interact with that person, which impacts the victim’s social identity, which in turn influences their very identity as a person, since a large part of our identity comes through how the world is reflected back to us. Hopefully, this helps you appreciate just how harmful bullying through gossip and rumors can be.